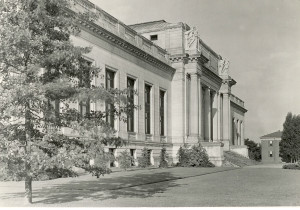 The Connecticut Heritage Foundation was established to support the programs and
purposes of the Connecticut State Library and Museum of Connecticut History.
This autonomous not for profit  501(c)3 corporation is governed by an independent Board of Directors. The Foundation opens the way for concerned private citizens, organizations, foundations, and corporations to support the preservation of Connecticut’s historical record and innovation in the delivery of library services.

To promote the awareness of Connecticut’s history and culture by providing resources that will support and expand the collections and educational programs of the Connecticut State Library and the Raymond E. Baldwin Museum of Connecticut History and Heritage.

Public Act 87-428 authorized the State Library Board “to establish a nonprofit foundation to raise funds from private sources.” The Certificate of Incorporation was executed December 15, 1988 on behalf of the State Library Board by Chairman Barbara B. Bryan, Vice Chairman E. Frederick Petersen, and Member William Secord. On April 4, 1991 the Internal Revenue Service granted tax-exempt status under Section 501 (c) 3. Public Act 99-116 made all private donations to the Connecticut State Library and Museum Foundation, Inc. subject to the law’s requirements for tax-exempt foundations associated with state agencies. Previously donations to the library foundation were put in the General Fund. Donations are now administered by the Foundation’s Board and held in its own accounts. Certificate of Incorporation was amended on April 28, 1999 to reflect the change in the Foundation’s name.